Apollon FC and The Football Business Academy have entered into an agreement that will see us collaborate with the Swiss educational institution.

This partnership will give FBA Candidates an opportunity as part of their internship, to put their knowledge into practice and support our club in different departments and business operations across our organization. They will also have a chance to work on the strategic projects that will involve the use of the new stadium to increase the dynamic and the potential of our team.

The Football Business Academy is a Swiss-based high level international educational institution whose goal is to professionalize the management of the football industry and facilitate the insertion of qualified professionals and future leaders in the game. Its flagship program, a Professional Master in Football Business, was codeveloped with international football industry experts from around the world around one foremost objective: to provide Candidates with all the necessary tools and an optimal learning environment in order to succeed in this passionate and dynamic industry. Other partners of The FBA include Benfica, Common Goal, ESSMA, Ukrainian Premier League, PTI Digital, and Girona FC.

“We are delighted to welcome Apollon Limassol FC as the new Partner and member of our FBA Family! The club’s progress and forward-thinking approach is a reflection of how we aim to professionalize the football industry. Through this partnership, our Candidates will be able to further develop their practical skills in a variety of departments, as well as support and be part of the significant advancements that will be happening at the club over the next few years. The diverse background and experience of FBA Candidates and Alumni will help the club with their continuous growth and strengthen Apollon FC’s brand on an international level.”

“Over the past decade, Apollon Limassol FC has been in the forefront of the development and modernization of football in Cyprus. Apart from building a football team which is capable of competing and excelling in UEFA competitions, the club has also invested in developing the operational and commercial practices of the club according to the standards set by Europe’s elite clubs. Obviously, recruiting people who are passionate about the football industry and helping them fulfil their potential as professionals, has been a primary objective. We are positive that the educational partnership between Apollon FC and The Football Business Academy will be a stepping stone for the future for our club but also for FBA Candidates, the football executives of tomorrow!”

The Apollon FC family welcomes The Football Business Academy and its students! 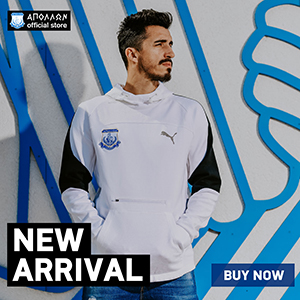 Draw result of 3rd qualifying round

All about OFI Crete

Apollon FC, a Legendary Football Club founded in 1954 and based in Limassol, Cyprus. Apollon FC currently plays in the Cypriot First Division and has won the championship title 3 times, the cup 9 times and the Super Cup 3 times.