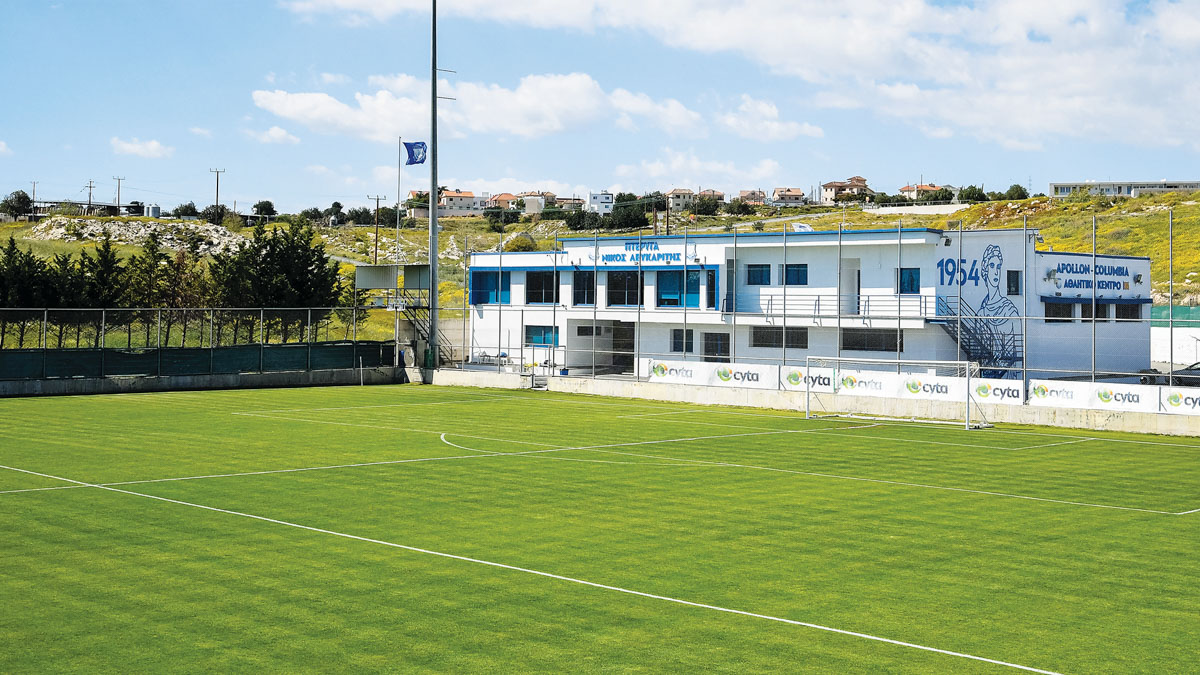 Owning a private training center used to be a dream for Apollon fans, until 2010, when Apollon Columbia first opened its doors. Apollon Columbia is located in Kolossi area, just a 10-minute drive from the city center.

The state-of-the-art sporting facility includes all the necessary provisions and equipment that a modern football team requires.

Construction began in December of 2008 and concluded on the 22nd of July 2010, when the then Cyprus Sport Organization’s President, Mr. Nicos Kartakoulis, carried out the grand opening. Shipmanagement giant Columbia, the company which supported Apollon for years and contributed in the construction of the training center, was represented by owner, Mr. Heinrich Schoeller.

Phase 2: Nicos Lefkaritis Wing
Apollon Columbia was constantly upgraded throughout the years, however the most important upgrade was done in 2016 with the addition of the “Nicos Lefkaritis” wing, which included a large leisure and dining space, a playroom, a media conference room, a studio for Apollon Web TV, a kitchen, an additional conference room, an extra office and four modern bedrooms.

During phase 2 of construction, upgrades where added to the previous facilities, with the addition of an indoor football pitch and new offices for the technical team. Moreover, the locker rooms where completely renovated.

The grand opening of the upgraded facilities was held on the 25th of November 2016, by the then UEFA Vice-President, Mr. Marios Lefkaritis and the owner of sponsor Columbia, Mr. Heinrich Schoeller. 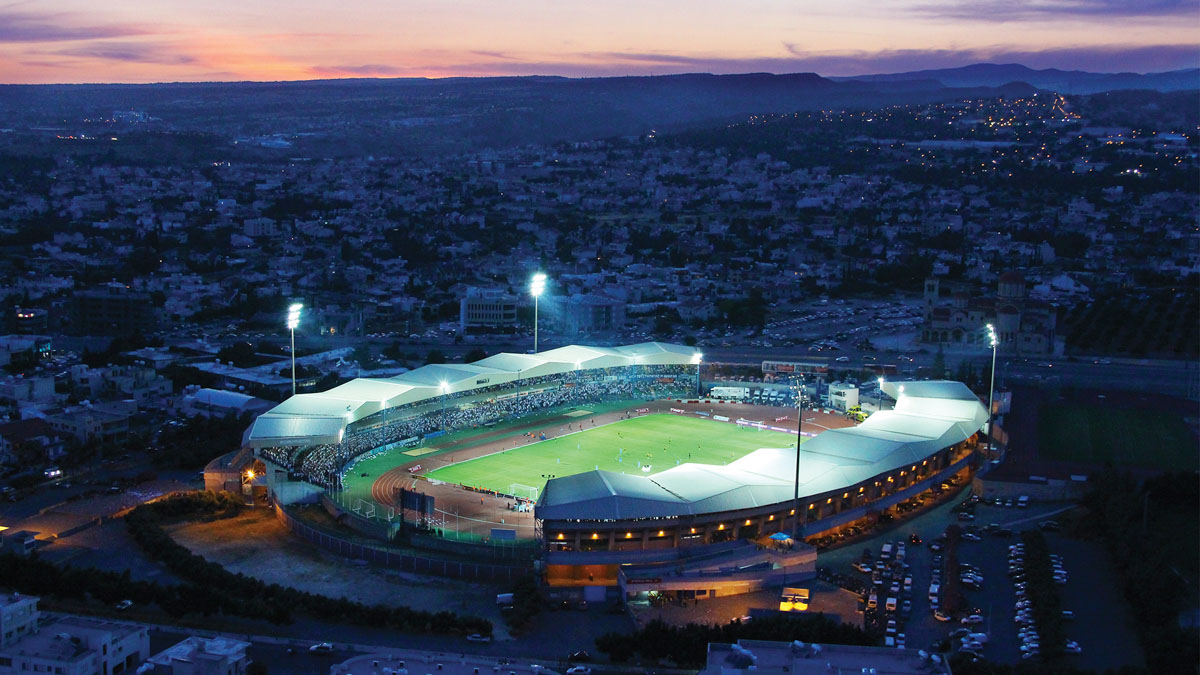 Tsireio is a multi-purpose stadium which was constructed in 1975 and has been the home of the city’s three big clubs, Apollon, AEL and Aris. In addition, Tsireio used to house the Cypriot National football team as well as hosting numerous athletics events.

Tsireio has a track around the football pitch, provisions for various other Olympic sports, a gym and a medical office, all for the purposes of the G.S.O. athletes. Furthermore, G.S.O. ‘s headquarters and museum are also housed at Tsireio, which took its name in honor of Petros Tsiros, who donated the land to the Limassol Council.

Limassol was in desperate need of a proper stadium and the government in collaboration with the council, decided to use the land donated by Petros Tsiros to build one. The first step was taken in 1972, when it was decided that the Cypriot Sports Organization would receive the land in order to build the stadium. The C.S.O. funded the construction but demanded that the organization would receive ownership of the sports facilities that G.S.O. was previously using in an attempt to lower the costs. Petros Tsiros, the G.S.O. and the Church of Cyprus, came together in order to assist the C.S.O. with the fulfillment of the construction plan. The initial plan was to build a 30.000 seat stadium, two training pitches, a basketball stadium with spectator stands, a tennis court, locker rooms, indoor training rooms and a parking lot, among other things.

All the above, where scheduled for construction over two phases, however only phase one was completed.

The opening game against the English National Football team
Tsireio officially opened on the 11th of May 1075, for a 1976 European Championship qualifier between the Cypriot national team and the mighty English National team. The next game was held on the 8th of June 1975, once again for a 1976 European Championship qualifier, against the Portuguese National team. These where the first official football games which took place at Tsireio Stadium, which then hosted a few friendly games before the Limassol football clubs started using the stadium for the purposes of the domestic football league, in the 1075-1976 football season.

Since then, Tsireio has been hosting games for Apollon, AEL and Aris as well as APEP Pitsilias, whenever they where playing in the First Division. The stadium underwent numerous renovations over the years but the most important one was the addition of the roof and seats in 1990, which made the stadium more spectator friendly and safe.

Tsireio hosted some great games, especially in the 90’s, such as Apollon’s games against Barcelona, Inter and Liverpool for European competitions. In addition, the stadium has hosted 16 domestic cup finals including the 2013 final between arch rivals, Apollon and AEL, with Apollon winning the title in a thrilling game which ended 2-1 in overtime, and the 2017 final, between Apollon and Omonoia, which ended in the same score and Apollon as the cup winner once again.

The current capacity of the stadium is 13.331 and the more recent additions of VIP and press areas have brought the stadium to its current form. 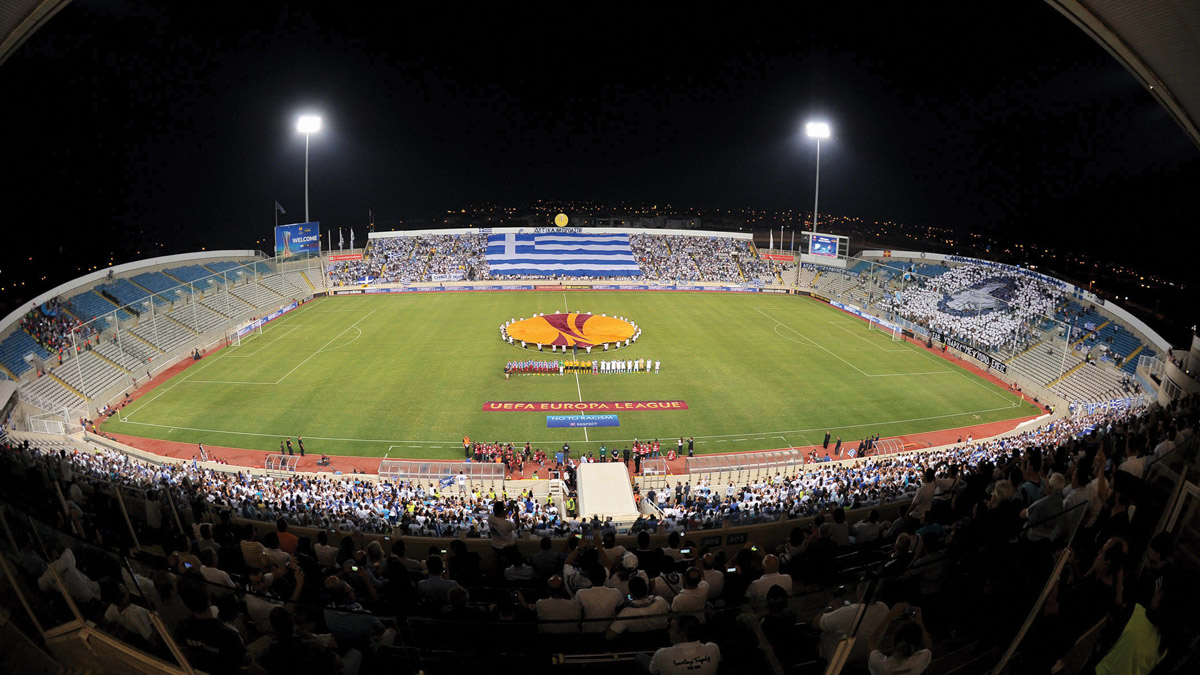 Tsireio might be the Apollon home ground for domestic games but the stadium does not comply with UEFA’s requirements for European competition games, therefore Apollon is forced to use the GSP Stadium in Nicosia, as the home ground for UEFA Champions League and Europa League games.

GSP opened its doors on the 6th of October 1999 and is currently hosting games of APOEL, Omonoia and previously for Olympiakos. The stadium also hosts cup finals and Super Cup games as well as all the games of the Cypriot National football team. Moreover, GSP Stadium is used by various other teams whenever they qualify for European competition games. 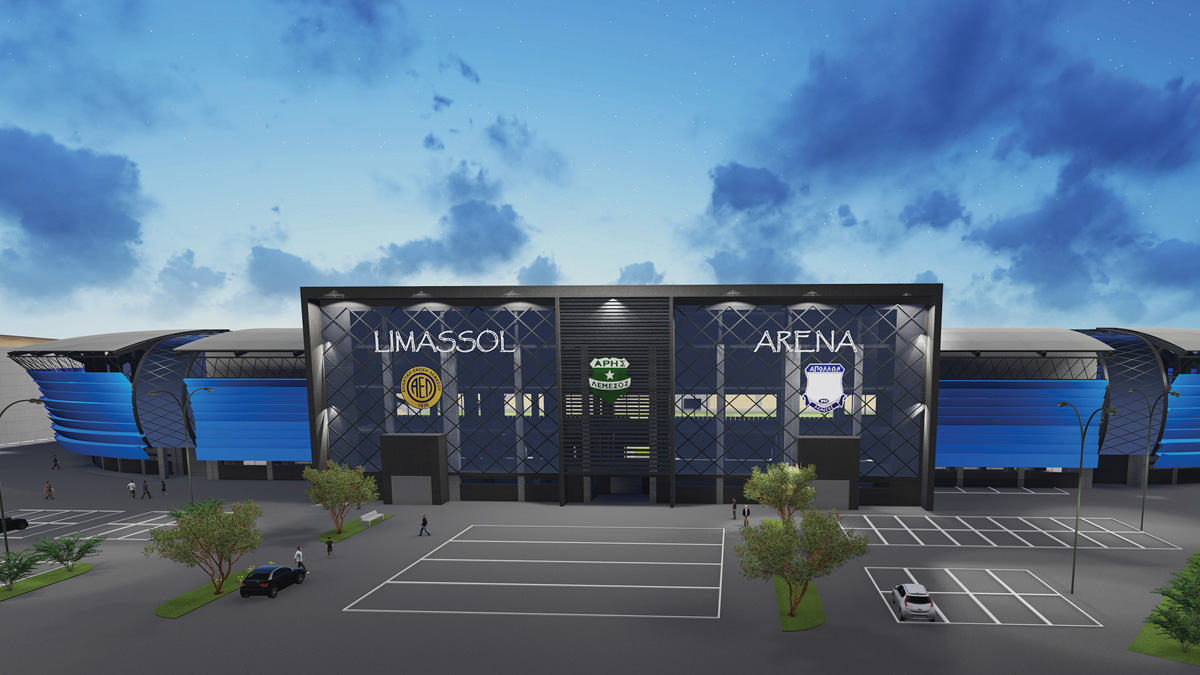 A new, modern stadium is currently being build at Kolossi, right next to the Apollon Columbia Training Center. The new stadium will be UEFA category 4 with an official capacity of 13000 seats and it will be used by Apollon, AEL and Aris.

The joint venture CYFIELD – NEOPHYTOU JV, is responsible for the construction, which began on the 28th of January 2019 and is scheduled to be completed by 2022. The total cost is estimated at €32.000.000.

The stadium’s facilities will include: a roof above all stands, four different locker rooms, a press area, a VIP area with VIP boxes and suites, access and designated areas for disable people, a CCTV system, cafeterias, restaurants, shops and training pitches.

Moreover, the stadium will be used for concerts, cultural events, exhibitions, as well as for the purposes of sport tourism.

A historic day for local football!

As the construction is moving forward, the dream of every Apollon fan is slowly becoming reality, since a modern stadium will increase the dynamic and the potential of the team. 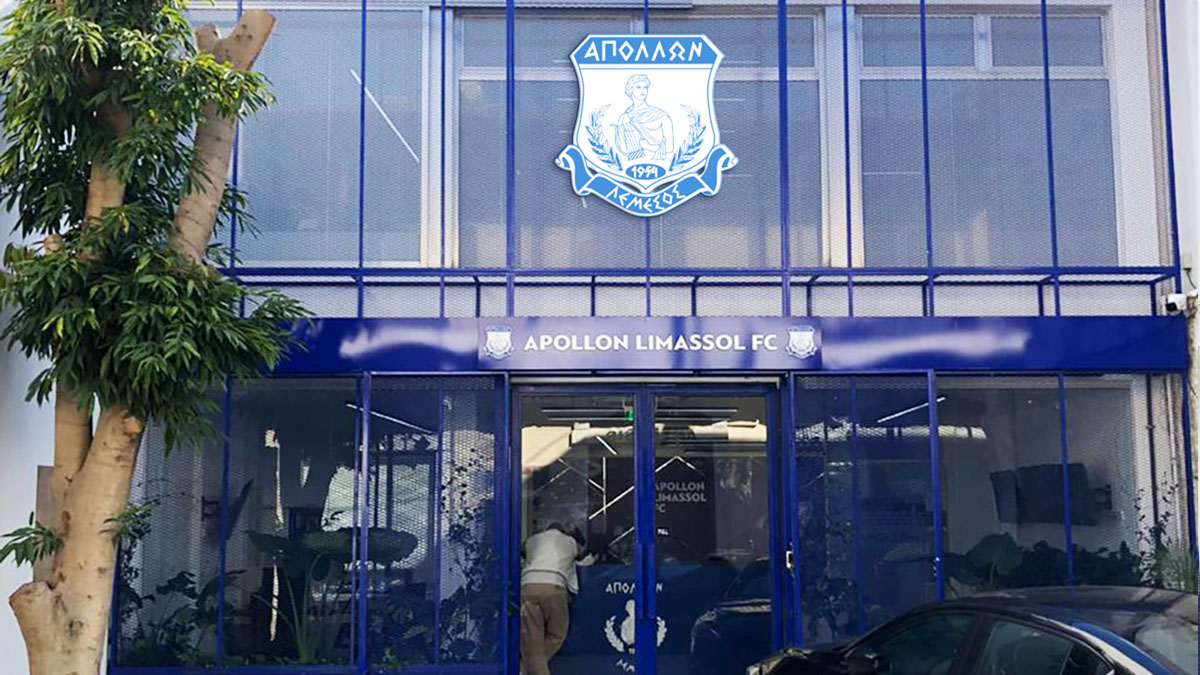 Since the establishment of Apollon Football Public Ltd, the headquarters where located in the iconic Apollon Club House in Gladstonos Street. In the summer of 2019, the company moved to its new, modern headquarters in Agiou Andreou Street, located in the old town part of Limassol.

The demanding nature of modern football along with the recent success of Apollon in European competitions and the admission of Apollon in the ECA, the EFDN and in the FARE have established Apollon as a club which is up to par with other big European clubs, in terms of CSR, marketing, branding and operations.