This football year was to be the reward of the efforts of the last 2-3 years and at the same time the justification for all those who were at Apollon and had made a protagonist team that claimed all the domestic titles, while it was also distinguished in Europe.

After an exciting ongoing championship, the “blue and whites” once again claimed the title until the end and unlike last season, this time they managed to prevail over Omonia in the last match, celebrating the second trophy in their history. 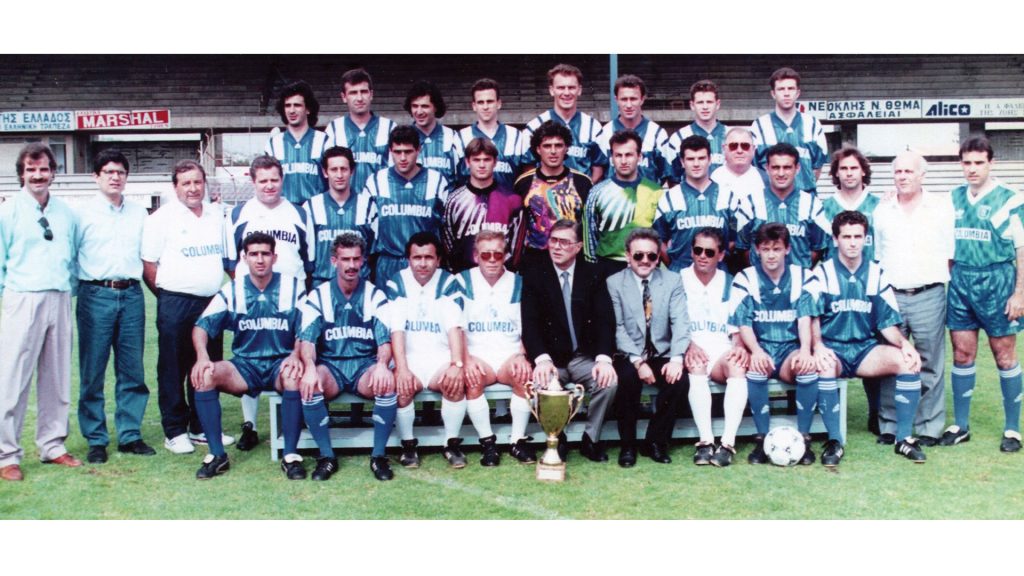 In a season in which teams had the right to use three foreigners instead of two for the first time, as was the case in previous years, Apollon began his duties in the new league reinforced by Slobodan Krismarevic, who along with Spoliaric and Cepovic composed perhaps the best trio of foreign footballers who have ever played in Cypriot football. In combination with the Cypriot footballers who were on the roster of the team and most of them were the “foam” of the league and were currently international, it was easy to understand that the capacity of the band created by Dilil Ferner was very large and that had all the backgrounds to celebrate again -after three years- the conquest of the title.

The “blue and whites” started the new football marathon in full force and after six games they had celebrated the three-pointer five times, while they had just drawn once, in the premiere with Omonia away from home. Until the completion of the 11th game and in the next five games, our team suffered three defeats by ENP, Anorthosis and Olympiakos – had won the other two with APOEL and Evagoras -, resulting in losing valuable ground in the effort to win the title and limit her chances of being crowned champion again after 1991.

It was, however, three defeats which were the only ones Apollon experienced that season in the first ranked institution of Cypriot football, since from the 12th game until the end of the championship a frantic course began, which led it to the top Olympus. Apollon scored five consecutive victories and gradually began to cover the difference that separated it from the champion Anorthosis, which with the then formed data seemed to be the big favorite to win the title, even managing to surpass it in the standings in the 18th game.

Apollon, however, could not be held for long in the first place, as it remained in the penthouse of the scoreboard until the 20th game, when it was tied with APOEL, at the same time that beat Evagoras with 5- 1 and climbed back to the top, surpassing our team by one point. Thus, everything showed that the two teams would finally resolve their differences in the derby between them, which would be held at the Tsirio Stadium, on April 2, 1994, in the context of the 22nd match.

The two teams lined up on the field of Tsireio, with Apollon only wanting the victory to be first again in the standings and Anorthosis to be content with a draw to stay at the top. Our team finally reached the victory with 2-0, thanks to goals by Chrysostom Christofi (Jura) and Slobodan Krismarevic, forcing the team of Famagusta to its first defeat after 21 games and which was the only one until completion of the championship.

Then, in the remaining four games on the one hand the “blue and whites” of Limassol were waiting for the “lady” to be bent, so that they could “lock” the conquest of the title earlier and on the other the “blue and whites” of Famagusta or to score losses of the god, to rise again to the top and gain another lead to ascend to the throne of Cypriot football.

From the 23rd to the 25th game, however, there was no difference, as the two teams continued with victories, with the result that the title was judged on May 7, 1994 and the 26th and last game.

Both Apollon and Anorthosis played at home, but the work of the Famagusta team is theoretically much easier, since it hosted the EPA, at the same time that our team was playing against Omonia, which was also the champion of the previous football season. Naturally, everyone’s eyes were on Limassol, with the anxiety peaking especially from the moment that the “lady” had cleared the game with the EPA early and while the first half of the Apollon-Omonia derby had ended in a goalless draw.

What followed in the next 45 minutes is not described, since the coronation of the new champion had a Hitchcock finale. The “greens” managed to open the score in Limassol thanks to a goal by Kizilasvili in the 47th minute, with the result that Apollon now needs two goals to win the title, since otherwise the championship would have ended in Anorthosis.

After the goal they conceded and without having any other choice, our team put even more pressure on its opponent, took a risk and gave everything to be able to make the complete reversal and not to tear down everything it built during the year, wanting at the same time to prove that the suffering of the 1992-93 season had become a lesson. With the completion of twenty minutes from the goal scored by Omonia, Dimitris Ioannou managed to bring the game to a close, with the adrenaline reaching its zenith and the whole of football Cyprus watching the derby with bated breath.

Things were clear now. In the next 23 minutes, without counting the time of the delay, Apollo needed another goal. A goal that was equivalent to a championship for the Limassol team. The players of the “clover”, however, strongly resisted and until three minutes before the end of the match the title was in the hands of Anorthosis. 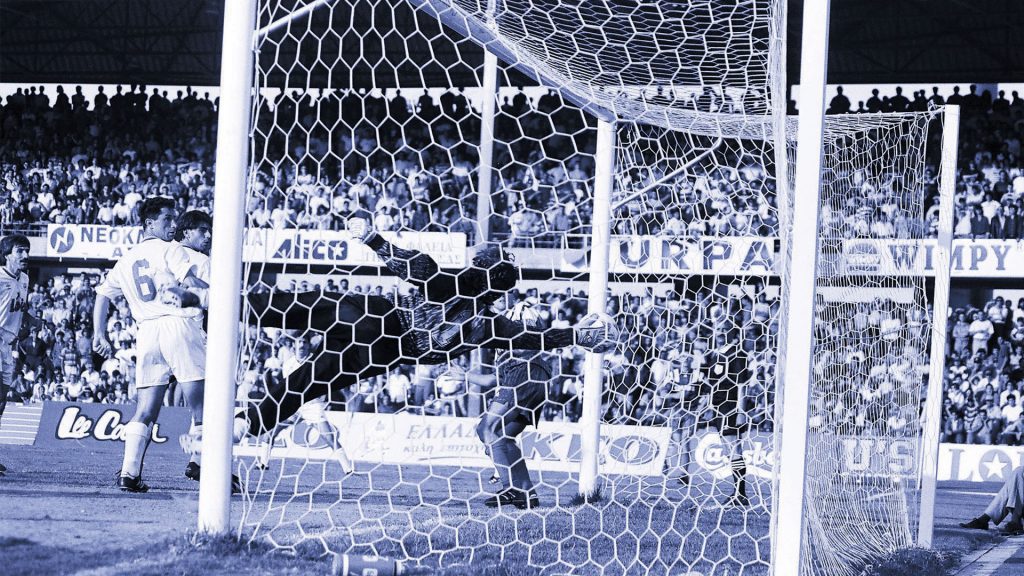 In the 88th minute, however, the specialist in foul executions, Milenko Spoliaric, had a different opinion and with a direct shot from the left side as Apollonas attacked, he made sure to put his stamp on the game, giving our team a 2-1 victory at the same time. the second championship in its history. 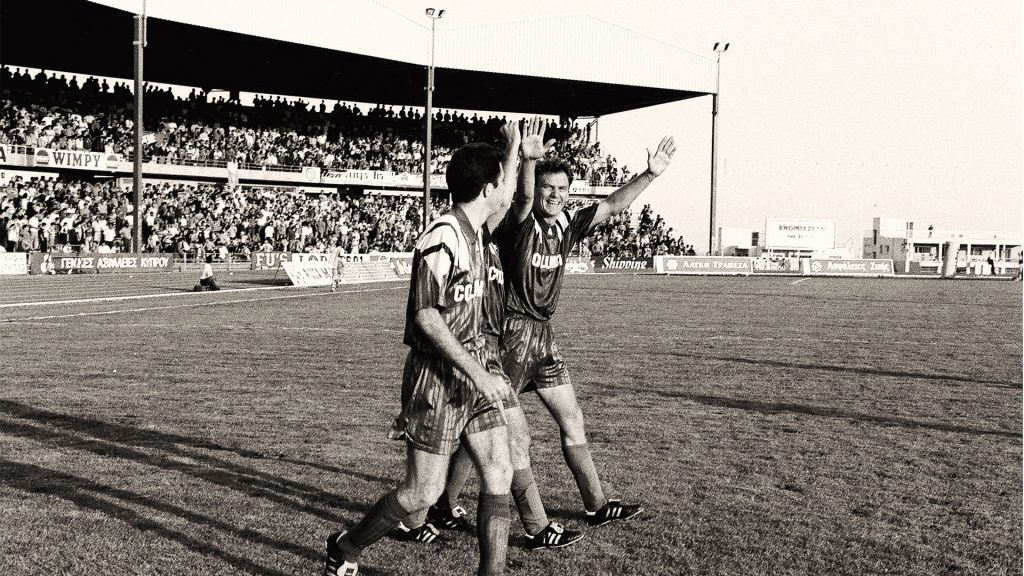 As it was understood, after the end of the match with Omonia, Limassol was paralyzed by the celebrations of the thousands of friends of Apollo. The slogan “APOLLO LEGEND CHAMPIONSHIP” was heard more and more intensely, more and more loudly, with the “blue and white delusion” having no end. 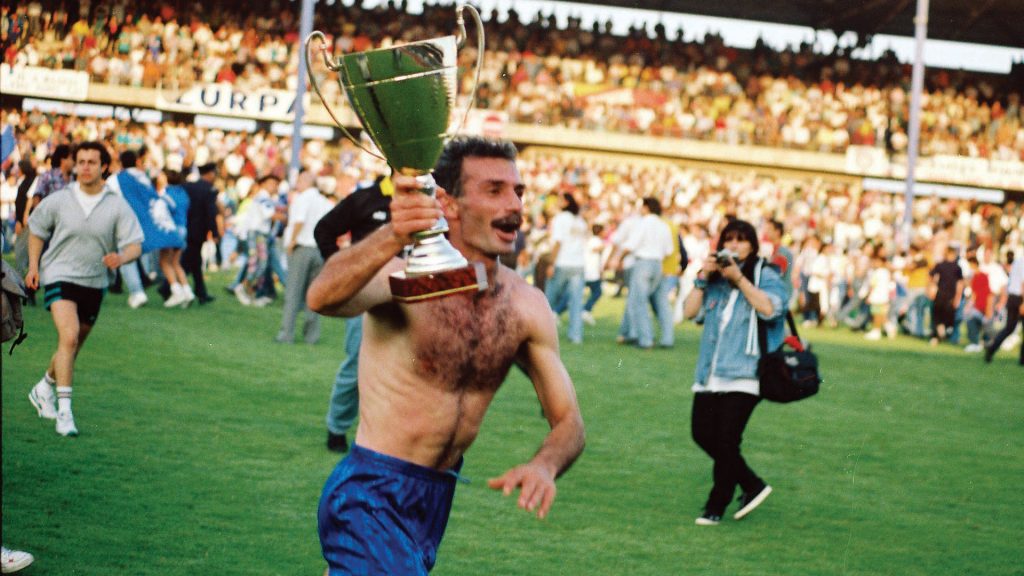 The “magician” had given the sweetest championship to date in the history of the team, doing what he knew best, performing set phases, committing a foul. A foul, which brought the goal that was equivalent to a title, giving unique moments to all those who live and breathe for the idea called Apollon Limassol. A title that was accompanied by the distribution of 89,711 tickets to the home league matches of the team.