After the big feat against Vats where Apollon overturned the 2-0 of the first match with a 4-0 victory in overtime in Tsirio, the draw played a bad game on Apollon, after throwing him in the “teeth” of the great Inter, which It had eight Italian internationals in its ranks, while it had acquired the “flying” Dutchman Dennis Bergkamp, ​​as well as one of the great stars of Russian football, Igor Salimov. There was no question of qualifying (even though the result of the first fight left a hidden hope), but Ferner’s armada aimed not to surrender its weapons unopposed and to make the name of Apollo be heard from one end to the other. all over Europe, something that was finally accomplished!

As we mentioned, the result of “Giuseppe Meazza” (close defeat with 1-0 with a very good performance by Apollon), made space for our team to believe in a great miracle against Inter, which arrived in Cyprus with all its big stars, since its leaders did not want to caught by surprise. However, the suffering of the first match did not become a lesson for the later champions of the UEFA Cup, since during the press conference the day before the match they talked about a healthy walk in Cyprus against the “fishermen” (this is what the goalkeeper called the Apollon footballers of Inter Walter Zenga before the game) and that the Milan match was a bad parenthesis for their team. In fact, the Italian goalkeeper had stressed in an arrogant style that there was no way the Mediterranean fishermen could violate his home!

In front of about 20 thousand people, our team found itself losing in the first ten minutes with 0-2 (Salimov 6΄ and Bergkamp 9΄), after the Italian footballers entered the field very decisively. However, from that point and for about twenty minutes, the “blue and white” players, playing amazing football, managed to recover by tying the match at 2-2, first with Spoljaric in the 11th minute and then with Cepovic in the 30th minute. Zenga could not believe that the “fishermen” managed to resurrect it and it was characteristic that when he conceded the equalizer, he hit the ground like crazy, putting them with “gods” and “demons”. After the draw, the Italians regrouped and managed to regain the lead in the 39th minute with Fontolan. 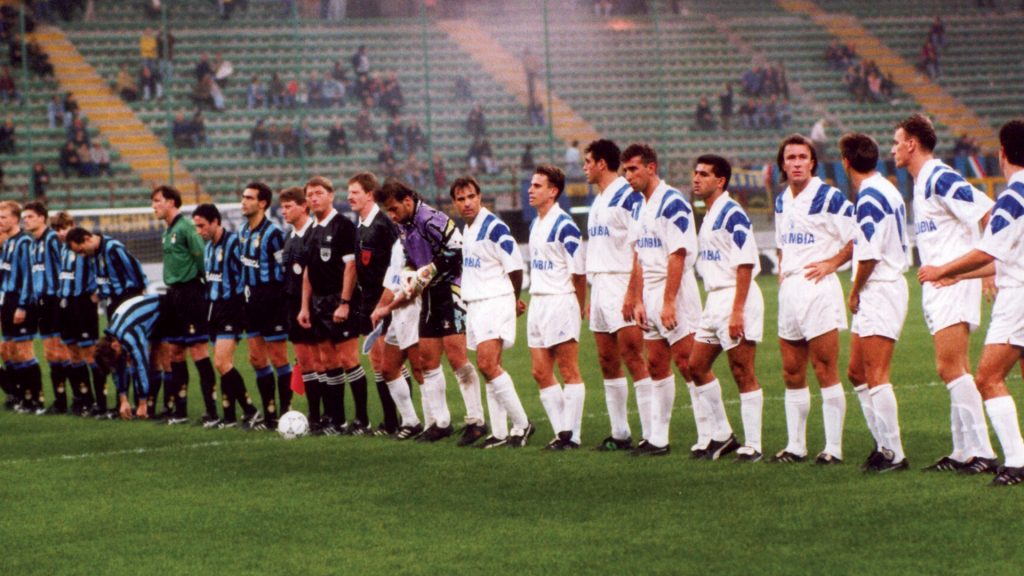 In the replay, the game became even more ambiguous with Apollon pushing for a draw and Inter trying to “clear” the qualification case once and for all. After several missed opportunities on both sides, our players managed to equalize with Iosifidis at 3-3 at 85 ΄, while until the final whistle of the end they lost three more glaring opportunities (with a highlight and a beam), to get a historic victory against a historical opponent. It was a great night for Apollon that, no matter how many years pass, those who experienced it, will not forget anything.